Fine weather and the promise of high quality fan experiences both on and off the race track saw huge crowds flock to the 17th Clipsal 500 Adelaide at the weekend.

The four-day event featured a range of motorsport action from seven race categories including the Toyo Tyres Stadium Super Trucks, which raced for points outside North America for the first time. The event also featured a Ferrari display of the world’s rarest supercars including the F40, F50 and ‘LaFerrari’.

The event also saw fast-growing health club chain Plus Fitness demonstrate its support for motor racing in Australia as the ‘Official Fitness Partner’ for the Clipsal 500 Adelaide.  Following on from successful partnerships in 2014 as the naming rights sponsor of the of the Plus Fitness Phillip Island 400 along with being an official partner the NRMA 500, Plus Fitness have also thrown their full support behind Aaren Russel car #58 in the Dunlop Series.

Commenting on the success of the weekend, South Australian Tourism Minister Leon Bignell stated “we expect close to $60 million to be pumped into the State’s economy.

“It’s been another huge success.”

Minister Bignell said the Clipsal 500 success was due to fans being offered a wide range of entertainment, with competitive motorsport racing, family activities and evening concerts. 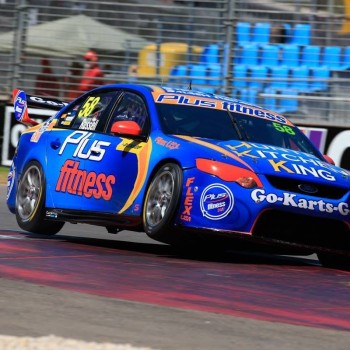 Minister Bignell highlighted how “every night, once the engine sounds died down the noise was replaced by celebrated musicians, from Australia’s hottest DJ’s including the Stafford Brothers, Havana Brown, Timmy Trumpet and Ruby Rose on Friday, to the Zep Boys performing the music of Led Zeppelin, and celebrated rocker John ‘Swanee’ Swan on Saturday.

“And of course, legendary Australian rock band Cold Chisel reunited last night, to perform along with Spiderbait and 100 Proof at the Sunday after-race concert.

“The Clipsal 500 offers so much more than just car racing. The CBD street circuit location enables fans to come and go between the track and the city centre, as well as other major tourist drawcards including the Fringe and Adelaide Festivals.

“We will continue to improve the fan experience for the 2016 Clipsal 500. This will include new grandstand seating with bigger, more comfortable seats that are easier to access.

“Fans continue to vote with their feet and the Government is committed to making sure they are given the highest quality entertainment experience.”

The V8 Supercars Dunlop 2015 Series continues at Barbagallo Raceway, Western Australia, from 1st to 3rd May.