Find a GymMembershipsOur ClassesOwn a GymCareers
EnquireJoin now
FIND YOUR LOCAL PLUS FITNESS
24/7 GYM -NO LOCK IN CONTRACTS
August 31st, 2020 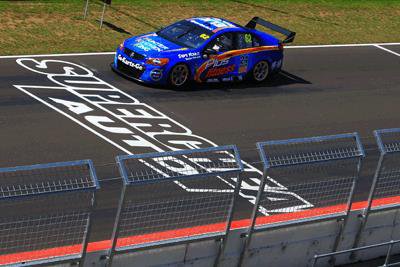 Just over a week has passed since Novocastrian Motorsport’s Aaren and Drew Russell completed their maiden V8 Supercars Bathurst 1000, finishing on the lead lap in 17th place and everyone is still buzzing from such a great result.

Racing as a one-off, ‘wildcard’ entry, Sunday’s race marked the culmination of months of hard work for the privateer family team and the brothers made the most of the experience.

After taking a steady approach during practice and qualifying as they came to grips with their Plus Fitness backed, and Garry Rogers Motorsport-built Commodore, Drew lined up 24th on the Mount Panorama grid.

The Plus Fitness entry broke into the top 20 during the second stint of the race and appeared in the top 10 at various stages while running long between pitstops.

A mid-race rain storm provided another curveball, but Aaren and Drew stayed out of trouble and pushed on.

Aaren set the car’s fastest lap, 2m08.8712s, on the penultimate tour, as the brothers completed the 161-lap journey in 17th place.

With the Bathurst programme complete, Novocastrian Motorsport’s focus now turns to the final round of the Dunlop V8 Supercars Series, with Aaren to race his regular Plus Fitness Falcon at Homebush on December 4-6.

AAREN RUSSELL
“What a week! Waking up this morning knowing I was going to be racing in the Bathurst 1000 was a special feeling.

“We put the nerves and excitement to one side and settled into a groove when the race started, and really just focused on keeping out of trouble and running our own race.

“The Plus Fitness Commodore treated us well and we managed to stay on the lead lap, which was one of our goals.

“Crossing the finish line and seeing our team hanging over the pitwall more than made all of the hard work worthwhile.”

DREW RUSSELL
“This is something we’ll all remember forever. Being able to race at Bathurst with Aaren and our little family team, with the backing an support of Plus Fitness was incredible.

“Everyone did an amazing job, not just this week up at Mount Panorama, but also over the last couple few months to make it possible.

“We came here as a true privateer team with the oldest car against the best and most-experienced outfits in Australian motorsport, and finished one of the toughest races in the world on the lead lap.

“A special thanks goes to our guys who have taken annual leave from their jobs to help us at the track - we can definitely hold our heads high with what we’ve achieved.”

WAYNE RUSSELL - OWNER
“It’s been a massive couple of months putting this together; in some respects it was actually relaxing to finally get to Bathurst and put the car on the track.

“We took a steady approach all week, and that paid off today in the race. Aaren and Drew did exactly what was asked of them and brought it home on the lead lap.

“I’m immensely proud of the boys for how they went about the week, they worked their way up to it and didn’t put a scratch on the car.

“I can’t thank Plus Fitness, our entire team and all of our sponsors enough for making this dream a reality.”