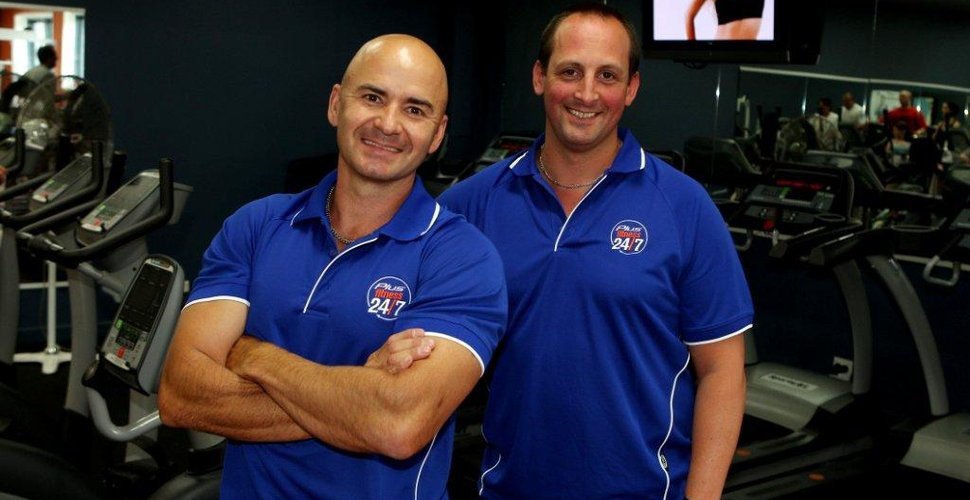 Plus Fitness, a company born from a desire to improve the strength and fitness of fellow Australians, is itself
growing stronger each year. Created and developed by John Fuller and Nigel Miller, Plus Fitness utilises both John
and Nigel’s extensive experience to grow the franchise system and the brand. John’s passion for health and fitness
originally came from necessity. Having survived a near fatal car accident in 1992, but sustaining severe leg injuries, John had to sell his existing successful business in the home improvement industry and embark upon a long journey of rehabilitation.
It was during this process that John became passionate about the physiology of the human body and the human spirit. He decided to study Sports Medicine and Business Management, supplementing his income and gaining valuable onsite experience by working as a fitness instructor. John then went on to become one of the fitness industries leading and most sought after personal trainers, working in a number of Sydney’s most exclusive health and fitness clubs.
By 1996, John was ready to open his own club. On a limited budget, but unlimited desire to succeed, John opened the doors of the first Plus Fitness in Northmead. The small club (in both size and membership base) grew from 67 members in 1996 to 1500 members in 2000. During this time period the gym space was rebuilt and renovated to four times its original size.
Northmead was so successful, exceeding 2000 members in 2003, that John knew it was time to purchase another site. Using the experience and systems he had put into place in his Northmead gym, John took over a struggling gym in Camden. He managed to turn the gym around in a short period of time and then went on, in 2007, to purchase sites
in Annangrove and Narellan. By 2008, John knew he was on to a good thing. His gyms were prospering, his
systems were in place and he was ready for more growth. It was at this point that John realised it was time to develop a more formal business relationship with his long-time friend and business consultant, Nigel Miller.

At the time, Nigel was also a successful gym owner in Sydney. He also worked as an extremely successful and well-known
consultant for the fitness business and training industry. With a background in banking and finance and over ten years
of consultancy under his belt, Nigel was the perfect choice to form the partnership that has now propelled Plus Fitness to the forefront of the industry.

In 2009, Plus Fitness had been operating successfully for 13 years. It was now time to take it to the next level. John and Nigel set out to grow the business, grow the brand and become one of the strongest contenders in the fitness industry.
They developed their strategy, their systems and their long-term goals. They opened the head office and their health club franchise model – as well as adding a further three clubs – all in 2009.

Then came the global financial crisis. Never ones to back down from a challenge, John and Nigel accepted the reality that it was now more difficult to find franchisees with enough available cash to purchase and run their Plus Fitness clubs.
The answer? Plus Fitness 24/7 – a fitness club that required a lower investment and lower running costs on behalf of the
franchisee and lower fees and greater flexibility for members.

Realising the 24 hour fitness model would work perfectly for Plus Fitness, John and Nigel set about revising their existing
business models and systems to incorporate the 24 hour gym concept. Plus Fitness 24/7 was officially launched
at the 2011 Sydney Franchise Expo. It was apparent at that point that the franchise system John and Nigel had developed
was a winner, as they signed up five new franchisees at the expo alone!

Looking forward, John and Nigel plan to have 75 gyms open throughout Australia by the end of 2012. Considering they have already opened the first Perth based franchise and have sold the territories for six gyms in Victoria and four gyms in Western Australia, the goal is already in sight.

Plus Fitness has been so successful, in fact, that they achieved a remarkable 430 per cent growth in 2011!

Fifteen years on, the success story of Plus Fitness is testament to the belief that passion, hard work and commitment can and will make you strong!

YOUR OW N ‘PERSONAL
TRAINER’
Buying a Plus Fitness 24/7 franchise is a little like starting a fitness program with a personal trainer.
You know what your goal is, you are willing  to put in the hard work and effort, you know you just need some guidance from a professional to help you reach your goal in the most efficient way.

You could just waltz into the gym and start randomly using the equipment, but why would you? Isn’t it better to utilise the
knowledge of a professional trainer with years and years of experience? The trainer has learned the hard way, made all the
mistakes and developed the most effective program to help you reach your goals.

The trainer gives you step-by-step instructions, coaches you on the correct techniques and motivates you and guides you
when you are struggling to keep going or lose sight of the big picture.
John and Nigel have developed a comprehensive, tried and tested business model that will help guide you every step
of the way – what better franchisors to have than…personal ‘business’ trainers!

STRONG FRANCHISE SUPPOR T
Plus Fitness 24/7 offers a true turnkey franchise business with an initial investment as low as $229,000 – including equipment! Add to this exclusive territories, low staffing costs, no ongoing software license fees, low
flat monthly royalty fees and unrivalled initial and ongoing franchisee support and you can see why Plus Fitness is in such
demand. You also get extensive marketing and administration tools, templates and assistance, IT equipment and installation, assistance with the fitout of your gym, loads of marketing materials and a whole host of
other benefits to get you going.

A LIFESTYLE CHOICE
One of the other key benefits of buying into the Plus Fitness 24/7 business model is the fact that whole business is designed
to allow you to run, monitor and manage your business both in house and away from the gym. You will have the peace of mind knowing that the time you put in actually at your gym will be invaluable, but while you are away from the gym you will be able to monitor the physical space as well as the day-to-day operations remotely. This allows you to work ‘in’ the business and ‘on’ the business, and also gives you the flexibility to be away from your gym but still keep your finger on the pulse of your business.

So what are you waiting for? For more information on a Plus Fitness 24/7 gym franchise in your area, contact Nigel
Miller at:
Phone: 02 4648 2099
Email: nigelm@plustfitness.com.au
Web: www.plusfitness.com.au